I made this quite a while ago.  It came out very spicy and I haven't really used it much recently.  However, the other day I was brave and tried some with the turkey patties I was having for dinner and wow!  So, so delicious.  The flavour has mellowed so much.  It still has a spiciness but not one that tastes 'raw'. It's improved so much and is so tasty that I thought I'd repost, especially as the tomato season will be on us in a couple of months.  Guess what I will be making . . .

One change - it will definitely go into wide necked jars this time!

Here's the copied post.
I made this recipe today.  Someone posted it in a Facebook group and apart from that I have no idea where it comes from, sorry.
I'll share the recipe first and then make some comments.

Slice/chop the tomatoes and onions. Put everything in a heavy based pan and slowly bring to the boil. Simmer for 2 hours. Whizz with a hand held blender and push through a sieve after that (do this whilst it is still hot). Bottle into sterilized, wide necked bottles or jars.

This makes about six 310g bottles (Reggae Reggae sauce bottles are brilliant for this) or 4 or 5 1lb jam jars. Store in a cool place and it will keep for months. Pop in the fridge once opened.

My comments:
1.  I used a tin of chopped tomatoes and made it up to 1k(I did half quantity) with cherry toms.  I then added a good squirt of tomato puree as the fresh tomatoes weren't as flavoursome as they could be (shop bought).

2.  It's quite spicy.  Really, really good but spicy.  When I make it again, which I will, I will halve the peppercorns and the cayenne (which is what I used).
(Edited:  no I won't, it is now just perfect!  Give it time to mature)

3.  I needed to add some water half way through the boiling as it was getting too dry.  Given that I needed to do that, maybe next time I will add some coca cola or pepsi.  I love the flavour that imparts.

Use whatever veggies you fancy.  As long as they roast, they can be used.  It would be lovely with some chunks of chicken or other leftover meat.  You don't need anything else on the side; it is filling and absolutely delicious.

This was made for a friend with food allergies/intolerances, hence the lack of things like mushrooms and garlic, but it is very adaptable.

You could use roasted veg leftovers for a Meatless Monday Meal!  Just cut out the first stage.  Leftover gravy doesn't happen very often but, if you had some, use that! 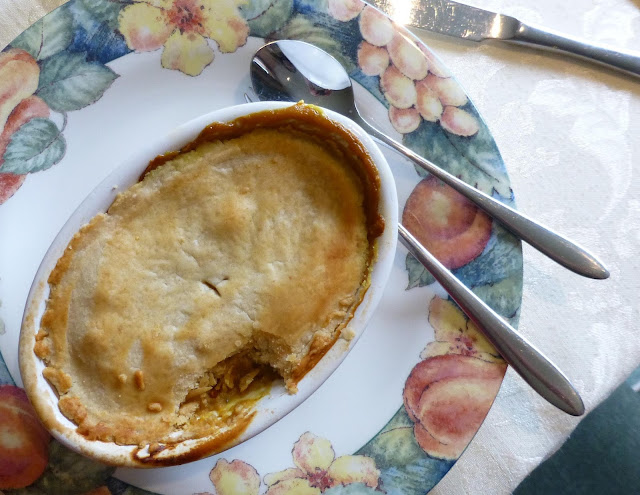 for the pastry
140g plain flour (I used savers as I always do nowadays)
pinch of salt
35g Trex (it needed to be vegetarian - I gather lard makes the best pastry!)
35g butter
a little milk for glazing

Method
Put the oil in a roasting dish and pop into the oven.  Heat the oven to around 180C

While the oven is heating, peel and chunk the carrot and pop into the roasting dish, stir in the oil and roast the carrot for about 30 mins because carrot takes longer to roast that the other veg.
The chunks are to your own liking.  Mine weren't too big.

Peel and chunk the other veg.  Keep the parsnip and sweet potato in water until ready to roast.
Pop the veg in the roasting dish with the carrot.  Stir well until they are all covered with oil and put back in the oven for another 20 to 30 mins until they are all soft.

Then make the pastry.  Rub the fat into the flour and salt until it resembles breadcrumbs.  Add three tbsp very cold water and mix gently until it comes together.  Shape into a ball, wrap and pop it into the fridge for half an hour.

Make the sauce by adding water to a good tbsp Marigold powder in a sauce pan, bring to a simmer, add some thickening granules until it is the thickness you want, then add some soft cheese.  The idea is to get something you can pour over the vegetables, cover with pastry and bake!  Too thin and it will make the pastry wet, too thick and it will be dry and unappetising.  The vegetables do absorb some of the sauce.  I didn't add salt as the stock is well seasoned.

When the vegetables are cooked, spoon them into a couple of oven proof individual dishes (or you can make one larger pie)  Mine were oval, as you can see in the photo, but use whatever you have really!
Pour over the gravy.
Roll out the chilled pastry and cut to the size you need.  I used a third dish as a template so the top fitted exactly.
Top the veg/sauce with the pastry.  Cut a criss cross in the middle and brush over some milk.  I used not to bother but it does make the pastry look tastier.  However, I resent using a whole egg when just a bit is needed so milk it has to be!

Put the dishes on a baking sheet (in case of spills) and bake in the oven at between 180 and 200 C until the sauce is bubbling and the pastry is cooked and a 'golden' brown.  Mine took 40 mins.

I served them in the dishes they were baked in, on a plate.  Nothing else needed.  They were delicious and filling and dead easy!

* Marigold bouillon powder is not cheap, there's no denying that.  However, it is tasty and you can use just what you want rather than having to chop up a stock cube or a stock pot.  I reckon it is better value in the longer term.  Not using it would be penny wise, pound foolish for me!
However, any stock can be used in this recipe.  It's the taste for the sauce that is important.

I sort of made this up this morning and it's delicious.  It takes next to no time to make and is very frugal

Sift the dry ingredients, add the yogurt and mix.  I tend to use the handle of a wooden spoon when mixing.  Add a little more yogurt if needed but the dough shouldn't be wet.

When the ingredients have all come together, tip them out and continue working them for a short time until you have a soft-ish dough, flouring the working surface if necessary.  Form the dough into the shape you want.  I made it round and pressed a deep cross into it using the handle of a wooden spoon.

Bake for about 15 mins, then reduce the heat to about 200 and bake for another 20 minutes or so.  it is done when there is a hollow sound when you tap the base.

Cool on a wire rack.

Soda bread stales quickly so if not needed right away, wrap and freeze.

I might try adding a bit of parmesan (or frugal equivalent) and mustard powder next time.  You could glaze the top with milk or beaten egg and sprinkle over some whole oats.
Posted by Joy at 10:14 2 comments:

I've had this recipe in the file for a very long time.  I first discovered it in a magazine in the last century (!), thought it looked likely, gave it a try and thought it delicious.
It's not frugal, nor particularly low in calories, it's just plain scrummy.

I made it again last night for me and a friend who is staying over and decided I really ought to share it so here it is.

Method:
Heat half the butter in wide pan over medium heat, add the apples and stir fry for 2 mins or until just tender.  Remove with slotted spoon and keep warm.
Increase heat to high and melt the remaining butter in the pan.  Add the chicken and stir fry for 3-4 mins or until browned.  Remove and keep warm.
Add onion and 2 tbsp of apple juice (or wine) to the pan and stir fry for 2-3 mins until onion is going soft.  Add the remaining liquid and bring to the boil.  Stir for one minute, then add the creme fraiche and cook, stirring, for 2 mins.  If you want to thicken the sauce a bit, use thickening granules at this point.
Return chicken and apples to the pan and mix thoroughly.  Season and serve hot with rice or a green salad*, garnished with parsley if required.

*  Last night I served it with new potatoes and steamed broccoli and it was absolutely delicious. 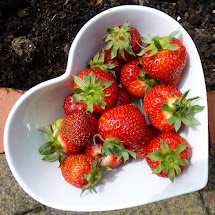